Dr. Camara Jones, APHA president, gave poignant allegories about racism during her talk at the UMD School of Public Health.

Dr. Camara Jones, president of the American Public Health Association and well-known educator on the impacts of racism on health, delivered a powerful talk on health equity and racism to a standing-room-only crowd during her visit to the UMD School of Public Health on March 10, 2016.

As a family physician and epidemiologist whose lifelong work and passion has been naming and addressing the effects of racism on the nation's health, Dr. Jones is currently leading a national campaign against racism for the American Public Health Association. Her presentation, "Achieving Health Equity: Tools for a National Campaign against Racism," elicited spontaneous bursts of applause and shouts of affirmation from the students, faculty, staff, and guests who packed the SPH lecture hall to hear her speak.

Dr. Jones used allegories to illustrate racism on three different levels and describe its impacts on individual and community health. She also presented strategies for eliminating racism in the university, workplace and everyday life. Racism is a system of structuring opportunity and assigning value based on the social interpretation of how one looks, she explained, that "saps the strength of the whole society through the waste of human resources and genius." She outlined three levels of racism -- institutionalized, personally-mediated, and internalized -- of which we are all victims and perpetrators, regardless of whether or not we realize it.

During her visit to SPH, Dr. Jones also met separately with groups of student leaders and faculty and staff for frank discussions about race and equity in the school and on campus. Both students and faculty members talked with her about experiencing or witnessing microagressions -- subtle insults and dismissals based on racial, ethnic or gender stereotypes -- in the classroom or other academic settings, and called for more diversity in faculty hires.

Dr. Jones' visit was part of the recently-launched, university-wide Maryland Dialogues on Diversity and Community campaign to help advance discussions of identity, difference and commonality.

"Given recent events in Baltimore, Charlestown, Ferguson, and colleges across the country, President Wallace Loh's Dialogue Implementation Team felt that combatting racism should be a major priority for our first year of the Diversity Dialogues," said Dr. Sally Koblinsky, professor of Family Science who has represented the SPH on the planning committee for the Maryland Dialogues on Diversity and Community. "My colleagues and I in Public Health knew that there was no better leader on this topic than Dr. Camara Jones. We were thrilled when she accepted our invitation."

In addition to serving as APHA president, Dr. Jones is Senior Fellow at the Satcher Health Leadership Institute and the Cardiovascular Research Institute, Morehouse School of Medicine. She was previously an Assistant Professor at the Harvard School of Public Health (from 1994 to 2000), and a Medical Officer at the Centers for Disease Control and Prevention from 2000 to 2014.

Dr. Jones authored and referenced the following articles during her presentation at the UMD School of Public Health:

Links to the recording of the talk, her presentation slides and other resources are below. 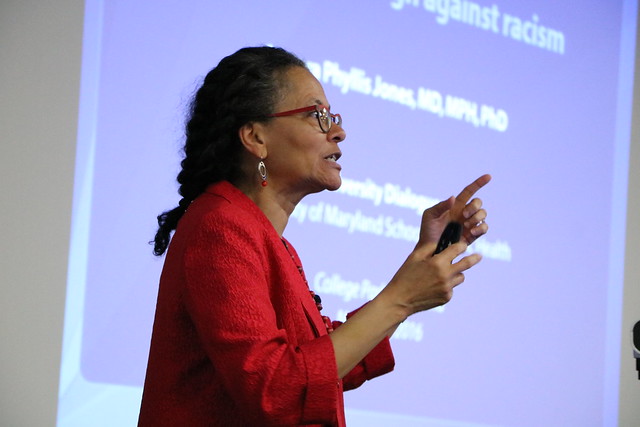 Interview with Dr. Jones at the APHA 2015 meeting