A stuffed monkey awaits the child who receives this Comfort Case, prepared by students in Dr. Butler's Health class.

One-hundred and forty students from Dr. James Butler’s Personal and Community Health class packed the ground floor hallway in the School of Public Health. Instead of attending class, however, the students were participating in an act of community care.

The students, in partnership with the organization Comfort Cases, spent an hour of their morning packing backpacks and duffle bags with items for many of the over 400,000 youth in the U.S. foster care system.

Rob Scheer, the founder of Comfort Cases, came up with the idea of giving each youth their own personal bag in which to store their belongings to replace the most ubiquitous “bag” in the foster care system: trash bags.

“Most people don’t realize that kids who enter the system are literally given a trash bag to carry all their belongings,” Scheer said.

Scheer, who also spent time in foster care as a youth, later adopted four children from the system. When they showed up at his home with their items in trash bags, he remembered his own experiences with homelessness when he too only had a trash bag to carry his things.

“I couldn’t believe that we’re a country that gives back so much, a country that cares so much, but we’re not thinking about something as simple as making sure that a child in the system gets a comfort case and not a trash bag,” Scheer said.

The comfort cases contain practical items, such as toothbrushes, deodorant and a blanket, as well as some more fun items, including a stuffed animal and a book. Each case also included a personal letter written by a student in Dr. Butler’s class.

Cases were also specially prepared for babies in the system. The cases eschewed toothbrushes in favor of items like bibs. One bib proudly proclaimed in bubble letters, “Cranky but Cute!”

“The cases are basically a way to show the kids that they matter, that they have a place in this world,” said Lisa, a student in Dr. Butler’s Health class.

This is the fourth year that Dr. Butler’s class has partnered with Comfort Cases. His class focuses on personal health and the impact of an individual’s health on the larger community.

“For the kids in the class, [preparing cases] is about giving, giving of themselves,” said Dr. Butler. “It’s showing them that ‘the world is outside of me.’”

Together students packed over 150 cases which will be shipped to individuals in Oregon, Indiana and Illinois.

“Your community is not your zip code, it is our human race,” said Scheer. “No matter what part of this country you live in, we are all affected.”

“This is to help the global community,” agreed William, another student in Dr. Butler’s class. “It’s to share love with an individual who I might not know but am definitely connected to.”

View a gallery of images from the event. 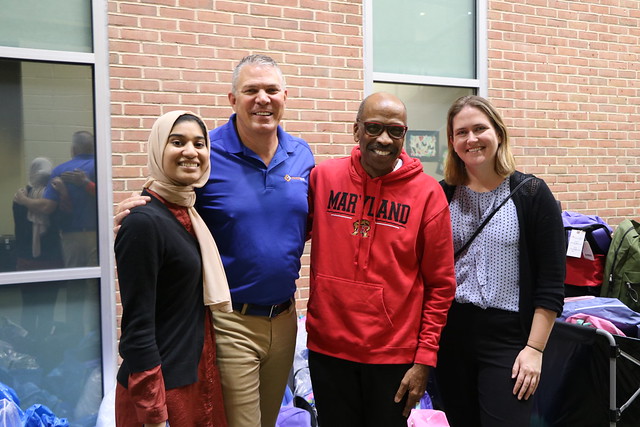