Following their release of a state-commissioned study on the potential public health impacts of fracking in Western Maryland, University of Maryland researchers are helping to inform the conversation about the potential risks associated with unconventional natural gas development and production.

While other states such as Ohio, Pennsylvania, and West Virginia have already begun drilling along the natural gas-rich Marcellus Shale formation, the Maryland government awaits direction from the Marcellus Shale Advisory Commission before deciding whether and how to tap the state’s natural resource.

Recent growth of and political demand for unconventional natural gas development and production (UNGDP) has outpaced research into the risks those efforts pose for population health, according to the team of health researchers who worked on the Maryland Marcellus Shale Public Health Study. Two recently published papers from the study team provide important insights for researchers and communities that can be applied when assessing potential health risks from fracking in other settings.

Devon Payne-Sturges, assistant professor in the UMD School of Public Health’s Maryland Institute for Applied Environmental Health (MIAEH) and Meleah Boyle, project manager for MIAEH, were lead authors of a study published in the journal PLOS One, describes the “hazard ranking” methodology they developed to assess the potential public health impacts of fracking on a variety of areas, including air quality, social determinants of health, water quality, occupational health and healthcare infrastructure.

“We felt it was important to publish this assessment methodology so other researchers and communities could benefit from a systematic public health evaluation process, which they could easily adapt for any other proposed UNGPD or resource extractive development projects,” said Dr. Payne-Sturges. “So often decisions made in sectors outside of the traditional health care sector rarely consider linkages to health, and this leaves open the potential for unintended consequences. Our methodology brings public health to the table.” 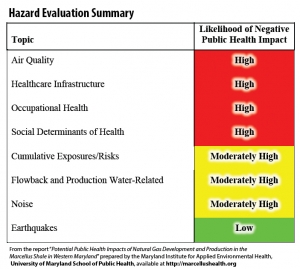 Of particular importance to the research team was developing a system that would be simple to communicate.

"We wanted a way to explain our findings to the community and policymakers that was clear and easy to understand," Ms. Boyle said.

The study looked at two Maryland counties, Allegany and Garrett -- the only anticipated areas of Marcellus gas production in the state -- though its authors say their methodology can be expanded to examine other areas. Researchers conducted an extensive scoping process, including site visits and a literature review, to identify specific hazards that should be addressed in a Health Impact Assessment (HIA). Hazards were organized into eight categories that would specifically impact the unique populations of Allegany and Garrett counties: 1) air quality, 2) water quality (including water quality, soil quality, and naturally occurring radiological materials), 3) noise, 4) earthquakes, 5) social determinants of health (e.g. crime, injuries, mental health, sexually transmitted infections, and substance abuse), 6) occupational health, 7) healthcare infrastructure, and 8) cumulative exposures and risk.

The final impact assessment methodology, modified from an existing HIA, consisted of a qualitative ranking and scoring system across those eight categories. Researchers also added a color-coded system to rank evaluations in terms of the potential risk of impact to public health. Each of the hazards was assessed according to established criteria, and assigned a score, which was then summed to produce a qualitative ranking: High, Moderately High, or Low levels of negative public health impact.

The manuscript uses three examples -- air quality, water quality and healthcare infrastructure -- to illustrate in detail how researchers applied the ranking method to each hazard.

“Should Maryland decided to move forward with fracking, our hazard ranking and overall report provided a set of recommendations that will minimize public health impacts,” wrote the study’s authors. “Our approach can be easily adapted by other communities facing similar situations as well as in other settings that entails making decisions with limited information.”

The Impacts of Fracking on Perceptions of Place and Identity

Thurka Sangaramoorthy, assistant professor in the Department of Anthropology of UMD’s College of Behavioral and Social Sciences, was the lead author of the study examining community perspectives and experiences with fracking published in the journal Social Science and Medicine. It examined community perspectives and experiences with ongoing fracking operations in Doddridge County, West Virginia. The findings from these interviews and site visit helped inform the baseline assessment of current regional population health, the assessment of potential public health impacts, and possible adaptive and mitigation strategies.

“Fracking does a lot more than just disrupt the environment. It disrupts people’s sense of place and identity, which is very important to this region of Appalachia,” explained Dr. Sangaramoorthy. “The residents we spoke to expressed deep distress over the transformation of their land, their homes, and their relationships with each other as a result of fracking, which also influenced their perceptions of environmental and health impacts.”

The study published in Social Science and Medicine examined how community residents perceive and experience fracking in Doddridge County, West Virginia, which has a similar demographic and health profile to Maryland’s Allegheny and Garrett counties. All three are rural, with high rates of poverty, and have populations that are older, more racially homogenous and more likely to lack health insurance and suffer from chronic diseases than both Maryland and West Virginia state averages.

The research team conducted focus groups and a multi-day site visit with Doddridge County residents to gain insight into how individuals living in communities where fracking is underway are being impacted.

One of the key issues that fragments communities where fracking occurs relates to who owns the rights to the land. “Split estates,” which separate surface (above-ground portion of land) and mineral (sub-surface) rights, are common in the Appalachian region. These were created because of historical federal acts passed to allow the federal government to retain access to future mineral discoveries. Many homeowners own only the surface rights to their property, and by law are required to allow the use of surface property for mineral access by fracking operations. Long-time neighboring residents of the same community may have different rights -- and a different sense of control and power -- because those who own mineral rights can choose to keep or sell their land for a good profit, while those who only own surface rights are unable to stop drilling companies from taking over their land. Surface owners face the potential destruction and contamination of their land and the devaluation of their property if they try to sell.

The study authors suggest that the rapid environmental change brought about by fracking in areas like Doddridge County is affecting the physical, mental and emotional health of residents of the area. If fracking is allowed in Maryland after the moratorium expires in October 2017, these impacts should be considered in the state’s plans for further research.

“The complex links between environmental impacts and social disruption can have long-term impacts on health outcomes. Ongoing research should examine the full spectrum of stress placed on communities that experience fracking,” Sangaramoorthy explained. “This can aid healthcare providers, community leaders and policymakers in designing programs and services for local communities who are impacted or could potentially be impacted by fracking.”