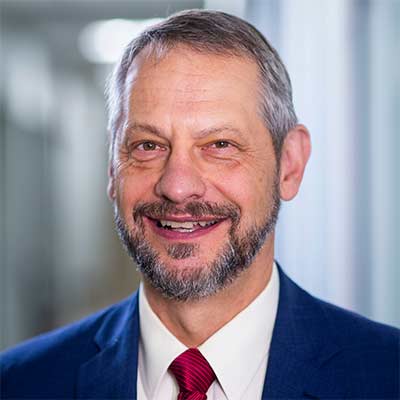 Boris D. Lushniak, MD, MPH, leads the School of Public Health, the University of Maryland’s youngest (est. 2007) and most racially and ethnically diverse academic college. As Dean, he has developed several new academic programs, including accelerated and dual degrees, launched a global health initiative and provided leadership in the context of the global coronavirus pandemic.

Dean Lushniak had a long and distinguished career in federal service, culminating in leadership roles as U.S. deputy surgeon general (2010–15) and acting surgeon general (2013–14). In 2015, he retired as a Rear Admiral from the U.S. Public Health Service Commissioned Corps where he was an officer for 27 years. Among his credits in the USPHS, he was part of the CDC/NIOSH team that responded to the devastation at Ground Zero after 9/11, served as the FDA Deputy Incident Commander for the 2009 H1N1 pandemic response and led the USPHS hospital providing care to Ebola patients in Liberia in 2015.

Boris D. Lushniak, MD, MPH, has led the School of Public Health since 2017. He has developed several new academic programs to meet workforce needs, launched a global health initiative and is creating ways for students to take action and engage civically through global experiences and activities focused on promoting social justice and equity and dismantling racism.

Before coming to UMD, he served as professor and chair of the Department of Preventive Medicine and Biostatistics and Professor of Dermatology, F. Edward Hébert School of Medicine at the Uniformed Services University of the Health Sciences (USUHS) in Bethesda, Maryland.

Dr. Lushniak was the U.S. Deputy Surgeon General from November 2010 to September 2015, assisting the Surgeon General in articulating the best available scientific information to the public to improve personal health and the health of the nation. He also oversaw the operations of the U.S. Public Health Service (USPHS) Commissioned Corps, comprised of approximately 6,700 uniformed health officers who serve in locations around the world to promote, protect, and advance the health and safety of our nation.

Dr. Lushniak served as Acting Surgeon General from July 2013 to December 2014 and was responsible for the release of the 50th Anniversary Surgeon General’s Report on Smoking and Health and the first ever Surgeon General’s Call to Action to Prevent Skin Cancer. From January to March 2015, he served as commander of the USPHS Monrovia Medical Unit in Liberia, the only U.S. government hospital providing care to Ebola patients.

Dr. Lushniak began his USPHS career in 1988 in the Epidemic Intelligence Service (EIS) and initially served with the CDC’s National Institute for Occupational Safety and Health (NIOSH) in Cincinnati, Ohio where he conducted epidemiological investigations of workplace hazards. In 1993, he completed a dermatology residency at the University of Cincinnati and established an occupational skin disease program at NIOSH. He also served on assignments in Bangladesh, St. Croix, Russia, and Kosovo, was part of the CDC/NIOSH team at Ground Zero and part of the CDC anthrax team in Washington, DC. In 2004, he transitioned from CDC to the FDA in the Office of Counterterrorism and was appointed FDA Assistant Commissioner for Counterterrorism Policy in 2005. He was deployed to Hurricane Katrina and also served as the FDA Deputy Incident Commander for the 2009 pandemic response. He was promoted to Rear Admiral, Lower Half in 2006 and attained the rank of Rear Admiral, Upper Half in 2010. He retired from the USPHS On October 1, 2015 after 27 years of service.

Dr. Lushniak was born in Chicago to post-World War II immigrants from Ukraine. He was admitted to the six-year Honors Program in Medical Education at Northwestern University and completed his B.S. degree in 1981 and M.D. in 1983. In 1984, he completed his MPH degree at Harvard University. He completed a residency in family medicine in 1987 (St Joseph Hospital, Chicago) and maintains certifications in dermatology and preventive medicine (occupational).

A firm believer in leadership by example, Dr. Lushniak also promotes the core messages of the National Prevention Strategy via his active lifestyle. He is an avid long-distance bicyclist, runner and hiker. He resides in Rockville, Maryland with his wife Dr. Patricia Cusumano and is a proud father of two daughters.