About Us: Maryland Center for Health Equity

In September 2010, the Maryland Center for Health Equity (M-CHE) was established with a central commitment to improving the health of residents in the state of Maryland.  Our primary focuses are to:

The M-CHE is headquartered in the Office of the Dean at the University of Maryland School of Public Health.  It is a TIER 3: Campus-­wide Research Initiative Program charged with providing support for development of broad, multidisciplinary research initiatives that will position the university to become a national leader in elimination of racial and ethnic health disparities aimed toward achieving the nation's Healthy People 2020 goal of health equity.   In 2012, the M-CHE was designated a Center of Excellence in Race, Ethnicity, and Health Disparities Research  by the NIH’s National Institute on Minority Health and Health Disparities (NIMHD, Award Number 5P20MD006737, Thomas & Quinn, PIs).

Our Mission is to advance the elimination of health disparities and achievement of health equity through innovative research, teaching and service.

Our Vision is a world in which everyone has an equitable opportunity to live a healthy life.

Our Values—building community capacity, diversity and inclusion, the pursuit of excellence, action, innovation, and collaborations and partnerships—inspire our work, how we interact with each other and the strategies we employ to fulfill our mission.

About Our Director Dr. Stephen B. Thomas 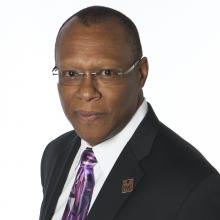 Stephen B. Thomas, Ph.D., is an internationally recognized, African American leader in minority health research and community engagement and has been a lead investigator of multiple studies investigating racial differences in health outcomes.

In 1997, Dr. Thomas received an NIH-NIAID Mentored Career Development Award (K01) in bioethics and completed certificates in research ethics at Georgetown University and the University of Washington. His K01 research explored the legacy of the Tuskegee Syphilis Study and led to the development of a “distrust, race and research” survey instrument, which informs researchers about the willingness of individuals to participate in clinical trials.

Dr. Thomas has since chaired the Minority Research Recruitment Working Group and the Race/Ethnicity Writing Group for BARI 2D, an NIH-NHLBI multisite clinical trial investigating surgical and medical treatment for cardiovascular disease among patients with type 2 diabetes and he currently co-chairs the Race and Ethnicity Working Group for the NIH-NHLBI Asthma Network.

During those years, Dr. Thomas led a number of highly successful NIH-sponsored research and infrastructure initiatives.  From 2002-2007, he served as the PI of a five-year NIH-NIMHD P60 grant titled “Excellence in Partnership through Community Outreach and Research on Disparities in Health and Training (EXPORT)” (5P60 MD000207).  This grant was competitively renewed for an additional five years in 2007 and supported the establishment of a Research Center of Excellence in Minority Health Disparities (PG60MD000207).

In 2009, Dr. Thomas and Dr. Sandra Quinn were awarded a prestigious Grand Opportunity (“GO”) grant sponsored by the Office of the NIH Director and the National Institute on Minority Health and Health Disparities (NIMHD).  This American Recovery and Reinvestment Act (ARRA) award was titled “Bioethics Research Infrastructure Initiative: Building Trust between Minorities and Researchers” (7RC2MD004766).  Notably, the collective body of work, contributed by Drs. Thomas and Quinn in the fields of minority health outcomes, clinical trial conduct, and bioethics have been acknowledged as highly influential in prompting President Bill Clinton to issue a formal apology for the Tuskegee (Alabama) Study of Untreated Syphilis of Men of African-American descent in 1997.

Dr. Thomas has also been highly engaged in the initiation and progress of training programs, which encourage the career development of minority scholars engaged in health care and research.  He served as founding training site director for the Kellogg Health Scholars Program at the University of Pittsburgh from 2003-2010.